The Swiss Young Physicists' Tournament (SYPT) is a Swiss competition, where physics enthusiasts from secondary schools from anywhere in Switzerland participate. In a preparatory phase they carry out a small research project, whose results are presented and defended at the actual tournament.

Pro IYPT-CH is the organization that organizes not only the national tournament SYPT but also the preparation for both the SYPT as well as the IYPT and the qualification for the Swiss team. 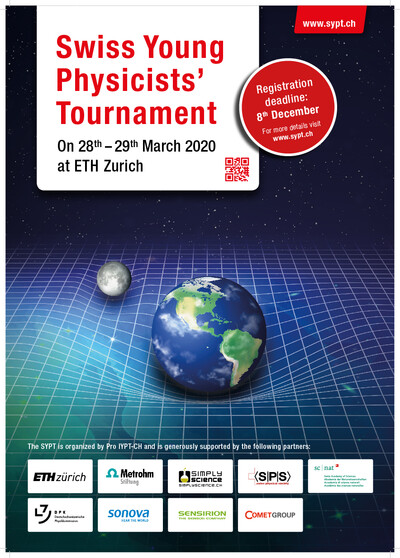 The Swiss Young Physicists' Tournament 2020 will take place on the 28th and 29th of March in the main building of ETH Zurich. We are happy that we can once again host the SYPT at ETH.

Registration for the SYPT and SYPT Physics Week is now closed. Over 60 students have signed up for SYPT 2020 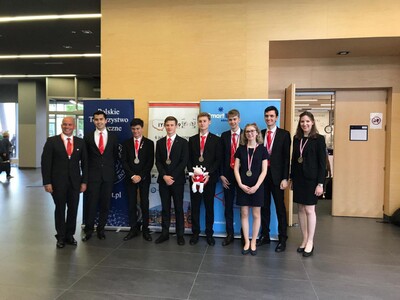 The SYPT 2019 was held on the 23rd and 24th of March at the FHNW in Brugg-Windisch. Roughly 70 students presented their projects in front of a jury. After the three preliminary rounds the teams Black Physics, Team Räupli and The Excited Ground States qualified for the final. In a competitive final the team The Excited Ground States consisting of Nicola Widmer, Daniel Gotsmann and Daniel Swingler won the 12th Swiss Young Phyisicists' Tournament. Congratulations to the winners and all our participants for a great tournament!

We would like to thank the FHNW as well as all helpers who made such a successful event possible.

The SYPT 2019 will take place on the 23rd and 24th of March at the Fachhochschule Nordwestschweiz in Brugg Windisch. We are delighted to have found an attractive venue for the 2019 Swiss Young Physicists' Tournament.

A total of 73 students and 43 jurors participated at the SYPT 2018. A succesful tournament was won by Team Blueshift (Natalia Lopez-Edge, Nic Baruffol and Jakob Storp). All results can be found here:

The individual ranking can be found here.

The SYPT 2018 will be held on the 17th and 18th of March at the University of Basel. We are delighted to have found such an attractive venue for our participants.

The majority of the tournament will take place in the Kollegienhaus of the University of Basel. Participants not living in Basel will be accomodated in the youth hostel St. Alban. Non-local jury members will stay in the Hotel Novotel Basel City.

The tournament starts on Saturday, 17th of March at 8.00 and ends on Sunday at around 5 p.m. The detailled schedule as well as the fight plan can be found in our tournament brochure. Guests are welcome at the tournament but a This email address is being protected from spambots. You need JavaScript enabled to view it. is required.

In preparation for the tournament we will again organize a one week preparation course, the SYPT Physics Week. During this week students work on their chosen problem while being supervised by SYPT-experienced coaches. High quality experimental equipment will be provided.

The SYPT Physics Week is scheduled for 12th to 16th of February at the MNG Rämibühl in Zurich.